Ashley and the Caterpillar..... 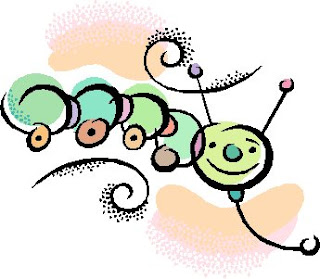 I don't know that I really need to say much today, Ashley's teacher has said it all. The following is an email that I received today about my darling little Peanut sneaking a caterpillar into school. I had emailed her apologizing for the fact that she had done it and to let her know that I was totally unaware of the situation until after the fact when Ashley had told me she had taken it to school. Read on and anyone with some sound advice for this little rascal please feel free to leave me a comment!!! Read on.....
Oh…she was a sneaky little trickster about it, too! She took it out of her bookbag right before lunch and snuck it into the lunchroom with her. I noticed that she had Joseph and a few others attention in the lunchroom, but she made sure she sat far away from me at the other end of the table, and I never got up and went down to that end of the table. After lunch in the bathroom, she was washing her hands and I saw something black in her hand and heard someone saying something about a caterpillar. Poor thing was about to drown!! Come to find out, she told the others not to tell me about the caterpillar in the lunchroom (and they actually LISTENED to her!) I could not believe NO ONE told on her, because that’s what pre-k kids are famous for!!

I asked her why she didn’t want me to know about the caterpillar and she just shrugged her shoulders…I told her I thought he would make an excellent class pet for us and I had a nice little bug house he could stay in. We also talked about why being sneaky was not a good idea…and that she did not need to let that happen again…☺

Boy are you guys gonna have your hands full when she’s a teenager if she’s this good at it now!