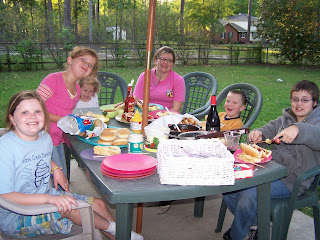 That is the last line in An Officer And a Gentleman as Richard Geer is carrying Deborah Winger out of the factory.

Sydney was recently given a Paula Deen's My First Cookbook and she LOVES it. She has carried it everywhere with her and in the mornings in the car she will read parts of it to me and she does it in a very Southern Paula Deen way. She's hilarious when it comes to accents. So of course she wanted to try out a recipe and asked if she could prepare supper one night. Yes I said, then immediately became enemy #1 because every freakin' night there was something we had to do and there was no time to organize her making dinner. It's extremely hard to explain to an almost 8 year old that there are only so many hours in a day and we can't fit it all in. They think that we have all the time in the world and don't realize how quickly the three hours between getting home and getting them ready for bed passes, especially when you have meetings, Choir, Baton blah blah blah. So we agreed that Friday would be her night and she could make fruit kebabs for when we had our cousins come over for dinner.

Excellent!!! Great idea. Taylor is her big cousin and was excited to help the younger girls because she also had been given the Paula Deen cookbook.
The kebabs turned out to be as pretty as they were delicious and soooo easy to make. The kids loved them and ate them all so we had to make more, a hit, wonderful!! Of course after dinner the kids all ran around the yard with the skewers poking each others eyes out... that's when it popped into my head.. Way to go Paula, way to go.

Today we did the frozen bananas and no one was hurt!!! I love this cook book too.

Email ThisBlogThis!Share to TwitterShare to FacebookShare to Pinterest
Labels: kids and cooking.