Refreshed and Ready to Rock...

Man, have you ever been fishing off a pier in Florida? It's a hot bed of eclectics and quite
frankly freaks... that's why we were there. However, it's the best thing in the world to me!
So... am I an eclectic or a freak? or are they, in fact, one and the same? 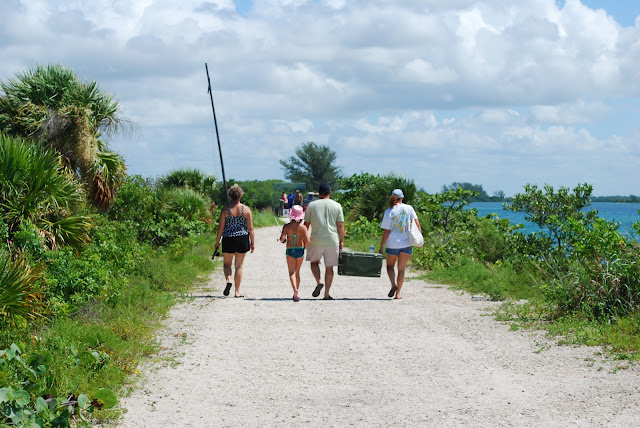 We filled the truck with fishing poles and coolers, sunscreen and hats, hooks and
squid, the squid is the bait... eewww and headed off to Gasparilla Island, yep the home
of Boca Grand and the vacation spot to the Bushes... yep those Bushes, W, Sr, Jed et al.
We didn't see any notable billionaires on our pier but who would even know? You're in the
back o' beyond out in the sun where everyones in a bathing suit and hat so you can't
tell who has the big bucks and who's collecting unemployment (that would be moi).
It waaasss the weekend and I'm entitled to a break in job hunting a couple of
days a week right???? I did ask my in laws if they'd hire me as an assistant to their
bulldog so I can put that down as job hunting...right???
We copped our spot on the pier and cast our lines.... fantastic!! I settled in with my
Nikon, snapping away and wondering what the Sam Hill was up with my camera?
Was I drunk? did I have something in my eye? was there sunscreen smeared on the
lens... WWWWWTTTTTTFFFFFFF!!!!!!
Panic stricken I dialed 911 and asked for the camera EMS peeps.
Before they even arrived I determined that someone had been messing
with my baby and had switched it to manual focus and turned the
VR (vibration reduction) to off...rendering me useless.
I think that's the next chapter of the manual... stay tuned.
Anyhoodles... the morning progressed, we caught several pin fish, a couple
of grunts and a holy mackerel!!!!! 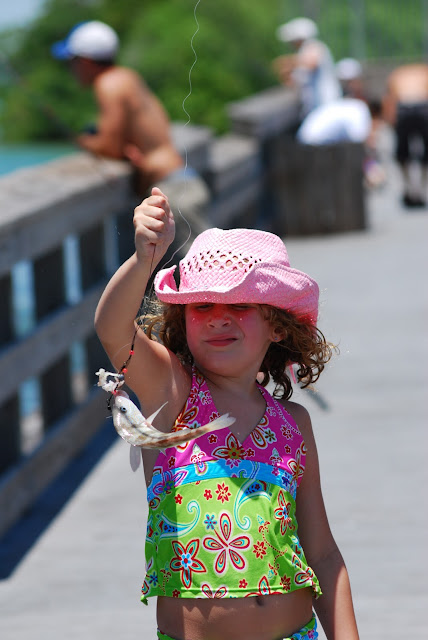 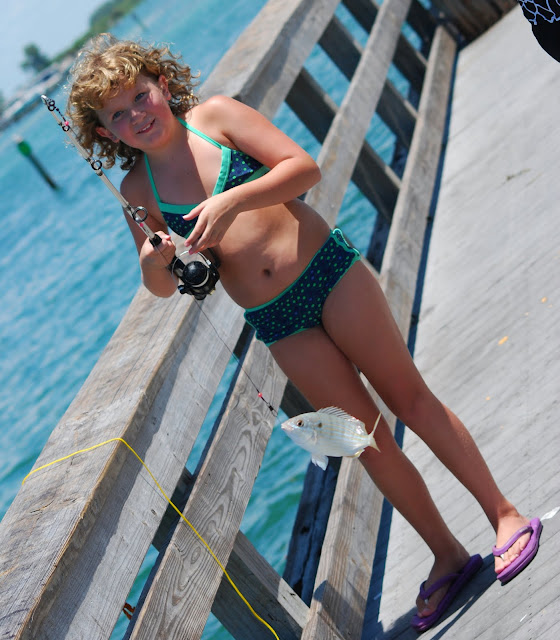 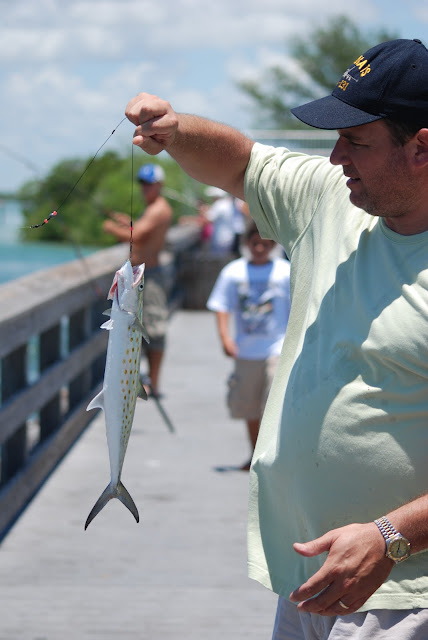 Now, none of the above seem overly appetizing to me, I'm more of a
mahi mahi or tuna steak girl myself and won't ever turn down a shrimp.
Still there are always those who will take your catch and put it to good
use, and that my friend is the best part of fishing a pier in Fla.
We were fishing close to a Vietnamese lady and her hubby who gladly
took our fish off the hooks and placed them in their catch bucket.
She told us how she would steam them in a soup bowl balanced on a
veggie basket in a large pot of boiling water and add ginger. She steams
them with the head on and hubby was more than happy to share that her
favorite parts are the cheeks!!! delish!!!!
Then a cute guy turned up to fish, thought he'd make a good catch for
Aunt Kim but apparently she was suffering from a fit of the shy's???
As if???
He caught me taking a pic of him just for fun!
He was topless with cargo shorts and a few tattoos... wore a hat and
had a cooler of beer... what more can you ask for?
My M-I-L was telling Aunt Kim about him looking at her.. of course I
knew he was staring at me.. pasty, fat and fortyish... he could hardly contain
himself, and who could blame him!!!
So all in all, a great afternoon fishing, the beers were gone and
the fish were fished and it was time to leave. Time to head to the
pool, enjoy some pizza and hang out and wait for the inevitable late afternoon storm.
What a lovely day, makes me want to move to the seaside.
I want to be where the sun sparkles across the water, where the fish jump
and make everyone say "You see that??" I want to be where we can hop into
a boat, sail out a ways and watch the porpoises at play.
Enough of Land... I'm off to be a mermaid with my beautiful Ash.

Great "fish" story! But don't go off and be a mermaid. Computers don't work so well "under the sea". And we'd miss you!

nice catches! the cheeks? sounds like a nice day...and i lived in florida...perhaps that is what happened to me...smiles.

Mermaid sounds fun, but I've always wondered where their poop comes out? And is it long and noodley like the fish poop in my aquarium?

time together like this is always so fun. but i will admit i never go fishing because i hate baiting the line (and taking the fish off) and if you didn't do that, then my father would not let us fish.

and how great that somebody wanted your fish !

ah yes... Beautiful! And I love the pic of Ash (I think) with the not so thrilled face holding up the fish! Kinda sums up my ideas on fishing. And it is sooo good to know you are not left in a rural field in Florida! I'm still mad at His Gorgeousness for that one!

That looks like a fun day! I'm glad your camera wasn't broken!