If you don't already follow Little Ms Blogger then I insist, yes insist, that you go over there now and officially follow that woman... go on.. do it now, you can come back and read my post later.... we no... on second thoughts you may never come back to me so finish reading this first and then go see her.

LMS recently... ahem.. like a month ago... gosh time flies... presented me with this award, the rules of which are as follows... (beastly stings attached!!)... I have to tell you ten things about myself which you may not already know and then tag ten other bloggers to do the same. 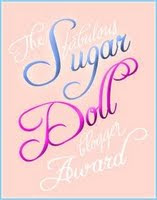 1) After leaving school I worked for the Gov in England, I was a Civil Servant!

Do they still call them that? Or are they now just Gov contractors in India? I was

what you might call a Welfare Officer, I would interview and assess claimants who

needed benefits on top of Unemployment or Disability.. yes folks it was a charming

little starter job. Although I gotta tell you I was good at it!!!

2) I once sent an email to the wrong person inviting him to a Birthday Bash, it

in London for drinks. Which is when I discovered he was a red head.

4) I have this freakish germ phobia, not your average afraid to shake hands thing,

but a fear of airborne germs, like breath and farts in particular! When I eat

spills their air on it!!!

know that I will marry John Travolta one day....but what you don't

marrying John just to make sure.

6) Scratch the above, I am truly, madly, deeply in love with my

wonderful hubby who is also tall dark and handsome ..

was in High School I played the oboe... funny now I think of it.

What the heck do you do with that later in life?

9) Before getting married I had a bunch of hen nights, English for

bachelorette parties. It was a constant celebration for months because

I was moving to the other side of the world and would miss my girlfriends.

What you might not guess is that I also had a Stag Party, yes a bachelor

party, myself and a bunch of my good male friends. We took a bus to the

Racetrack and bet on horses all afternoon, then went on a pub crawl in the

10) Travelling is my first love, there's nothing like the feeling of a journey

to the unknown, checking out historic sites, sampling local traditions

and cuisine. Meeting people of other cultures and lifestyles is a

huge rush for me. If I could just one day pack up a change of

clothes, some fab accessories and my camera and take hubby

around the world I think I would. He's a good traveler too.

Well that's it folks, hope you enjoyed my ten things you didn't know.... it's quite

therapeutic to dig up these hidden loves, hates and experiences.

Good for the Goose

You've got to be Kidding me

Well... all right then. Everyone likes a good challenge.

I'll probably tell a bunch of lies, though.

Oh why thank you! Honesty is the best policy - we accept the challenge - though it may take us a while to come up with something!

I'm with you on the travel dream. I also could have easily had a Stag party before our wedding, but all the boys were at a strip bar with my hubby to be :0(

Congrats!! Well deserved, for sure!

Blognut...lies are fun..in the blogosphere, not if they're life threatening or fraudulent or whatever.... ya know!!!

Bumbles... take your time, I did!! and I know you already have a busy blog schedule, I can wait!

GEM.. thank you, I love these things!

Hey, thanks for that. It was interesting.

what a great list... and so much fun to read! happy weekend... oh and if i see john, i´ll send him your way.

Oh Alli! Dunker Shine... hee hee! You know I will do this... Don't know if I can pass it on or anything... But I will reveal 10 things. Kinda challenging after the 30 Secrets!

Stacey...the challenging part is sooo the passing on. It was like a freakin' blogathon last night all that linkin' and commenting and blah blah blah... I'm whipped this morning!

I had never thought of fart germs..new one to add to my list! Hey, is that Moonstruck Nick Cage or the older Nick Cage?
Happy weekend!

These are always so much fun -- learning more about our blogging friends. Congrats on the award and thanks for passing it on to me!

Marion... it's the Raisin' Arizona Nick that I like the best!! LMAO
No I think the National Treasure Nick and Family Man Nick are what I look for in a man!

Mari..I'm still not ready to let JT go altogether but will keep you posted. Check with me in six months or so.

Do you ever wonder if you could still play the oboe? I miss my French Horn.

I can see you being a very safe driver :)

I am also a germaphobe, but I always get sick anyway? So what is the point?

Thanks for thinking of me McGillicutty. I am not sure you all don't already know everything there is to know about me by now. I mean, I AM an open book. But I'll give it a shot sometime soon.

P.S. Fart germs? I'm so with you on that. Just stop breathing!!

Liar.... I have a friend who actually makes it a point to only breathe through her nose!!! funny stuff!!!

Wow, I am such a loser and haven't said thank you yet! Thank You! I also love house hunters. It makes me envious though as I have yet to buy my own home...hopefully it will happen one of these days