A lesson in economics and negotiation. 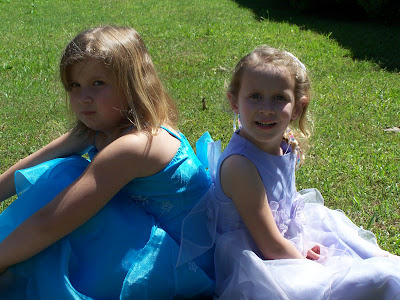 For those of you with young children, a word of advice, make them three envelopes for their money, SAVE, SPEND AND GIVE AWAY. That way they will grow up a lot wiser than we are and their generation may not have to face the problems of ours.

I have never been good at encouraging the girls to save, yes they have piggy banks but it's all just lip service really because like me they have inherited the I want it now gene.  The money in their banks gives them a lot less pleasure than the toys in their hands.  Therefore I am changing the tactics and going to the Dave Ramsey method of giving them three jars mentioned above. That way they will have the best of all worlds.

This weekend was a great example, Ashley has been holding onto a gift card that she received for her birthday,  it was for Walmart and she's a Target girl. She specifically wanted an item she had seen at Target that they didn't carry in Wally World, so I suggested that she give me the gift card and I'll give her ten bucks which she can then spend anywhere she wants.  OK, it took her a while to see what this transaction meant but she finally agreed.  Then she told me .... well, we can go to Walmart and spend my gift card on a toy, then you can give me some ten dollars and we'll go to Target!!!  Uhhh no Ash it's not gonna work like that but nice try.

So off we go, three intrepid shoppers ready to seize the bargains and seek out all the cutest stuff around.  We arrive in Target and after messing around with bras on their heads we move on to the toy department. All of a sudden Syd has an attack of the can't waits, I gotta have it.  Note to self, when you're already inside Target toy department there is no use trying to explain the finer points of saving up for things you want versus the instant gratification of buying stuff you don't really want just 'cos you need something NOW!!!!!  It was a pointless exercise and she wasn't having any of it.  I thought she was going to have a freakin' breakdown..... until that is.... ping the light bulb went off right above her beautiful little head... the negotiations began.  Syd approached Ashley and told her that even though they both had $10 each and it wasn't enough to buy the toys each of them wanted separately ... they could put their money together, purchase said toy and share it. Awesome!!!! I was totally impressed that she came up with the solution all by herself, Ash was not immediately on board but Syd can be very persuasive when she wants to be.

So here we are safely home and they are playing together (not exactly in harmony) but they're sharing and playing and it's a creative toy with which they are making little pictures out of tiny balls. Cool. Later we will set about making the envelopes/jars/whatever to split their money up from the get go.... thus knowing they'll have some in savings at home on the next shopping trip out. God Bless Dave Ramsey...go check him out, now, seriously your life will never be the same!

p.s.. I just heard Ash tell Syd that she thinks she's the funniest sister in the whole wide world... cute!

The kids took the money out their piggy banks and bought video games three months ago and they are STILL asking me why I "took" the money from their bank. This is a hard lesson for them I think.

The jar idea is a great one. I am totally an "I want it now" person too and I'm 28! I don' t think that ever goes away if that's your personality. It's usually hard for me to come up with a Christmas list because I've already bought myself the things I want...but I really am happy when I've bought something...it's not like I'm trying to fill a void...or whatever the experts will tell you.

Goose, thanks for stopping by... it is a hard lesson.. i totally suck at it and always come up with lame reasons as to why I have to have it now!

I'm impressed they are sharing. Seriously. I don't know your girls, but I have 2 of my own. That whole sharing thing would last about 2 minutes... But good for you. You are raising girls as awesome as yourself. I just hope they didn't inherit your colorful language.

Dave Ramsey rocks!! My two get their "commissions" every week and we divide in to their Give, Save & Spend envelopes. Lexi spent some today at her book fair. She bought a book for her and one for Jace for Christmas. He used his money at his book fair and did the same. So Christmas shopping is almost done on their part.