Something sparked my interest..... 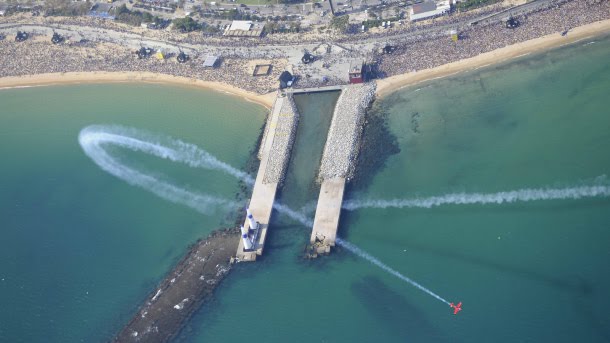 OK there's not a great deal that dearest darling hubby watches on TV that I pay attention to. He's the typical male channel surfer, skipping from one thing to another never watching more than five seconds of any given program. The most time he spends on one thing will be something like Modern Marvels (yes, yes darling, very interesting) or he likes to watch the History Channel and is intrigued by stuff like the First World War, Hitler and blah blah I know I lost you for a minute there didn't I... don't deny it, I know you drifted off to sleep.

So when he started again the other night I picked up my net book and proceeded to check out some fabulous blogs, that's way more betterer than the crapola he's watching, right? Wrong!!!!  Mr Surfer Dude stumbled on the Red Bull Air Races, whoooaaa have you ever seen them??? You can go here and see a little of what it's all about. I love races, although its been a long time since I have been to any now I think about it. I used to live for the horse race season in the summer time back home in good old Salisbury...my hometown in the UK.  Sundays were made for the Grand Prix of course, yet another thing I haven't kept up with over here. Anyway I digress...... Although I am such a fan of fast moving things I have never gotten into Nascar... nope just never really grabbed me. Other sports such as football and baseball have too many rules and a gazillion players so I don't care much for those. However, give me a race, a good old fashioned see who's the fastest, chance of a pile up, a handsome winner who makes the ladies weak at the knees... oh yes now that will grab my attention. Yes siree. 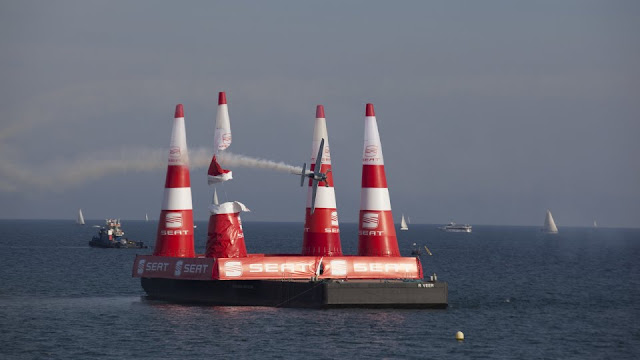 Red Bull Air Racing has all of the above, for a start they're racing airplanes... awesome... then there's lots of tall pilon things that they have to race through and it adds to the excitement when they demolish one or two or more.  These things are designed to be demolished and can be replaced in about 30 seconds. Add to that lots of exotic locations and you're onto a winner.  The planes fly out over a river or coastline and go at fantastic speeds... of course there's lots of champagne for the winners and big money prizes... this could well be my new favorite spectator sport. I have checked it out and already I'm signed up for a notification email of the dates and locations for the 2010 season! Look at me all geared up to head out there and cheer on the Red Baron or Paul Bonhomme (which in French means Good Man...yep I agree!!). 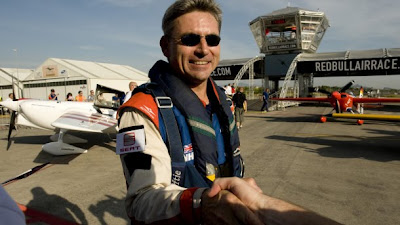 The best thing is that Paul Bonhomme is a  Brit (of course!) we love this kind of shit. I can't wait to investigate this further, I can't wait for air races to over take Blogging as my new hobby. Of course I can't fly but I can be in the crowd with the other hot old chicks cheering on the guys in the skies!!!!(must lose a couple hundred lbs and get some cool shades).  I've always had a thing for men in flying suits hence my attraction to hubby; those reading this who are RW friends know he sells paint and will laugh... however... he hasn't always done that now has he? It may surprise you to know he was the real Maverick (not really but he has been to Top Gun).

Go on over there and check out all the fun, lets do a blog camp at a race next year!!! Oooohh I'm all excited, better go and have a cold shower or something!!! Cheerio Chaps.

We can go to Alanta Motor Speedway!

Isn't that the coolest? They have a race every year in June on the river between Detroit and Windsor, Ontario. One of these years, I'm going!

Ive never heard of it, but bring me some wine and I am totally IN LIKE SIN! Woo woo!

No to Atl Mot Speed...sorry Otin.
Fidge.. I'm grabbing Bambi on the way and we're headed to you for the 2010 races...we'll bring the Champers.. I'm sure it's a Champers kind of sport.

Rather excellent idea and it is duly