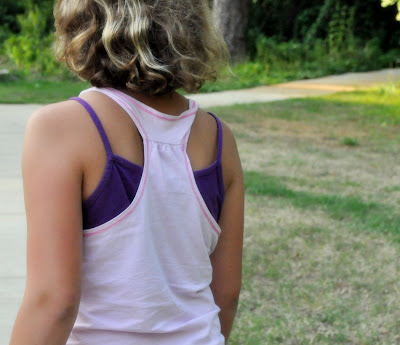 I think that for most of the my friends and family it's Spring, but for us here in the deep south it feels distinctly summerish.

The girls finished up school last Friday and have spent three days at summer camp, yes three days, and this is how Syd looks already. Blonde highlights, tanned skin and a lovely relaxed glow about her. They spend the days playing games, getting lots of exercise and swimming.... bliss. The past couple of years we had teens coming to the house to take care of them in the summer but this year decided to send them to camp at the local YMCA instead. My reasoning for this was that it cost about the same, they would get plenty of exercise and have a routine and mostly because for the last two summers they ate us out of house and freakin' home!!!!!! It was quite astonishing to see how much food a couple of kids and a teenage sitter could get through in a day never mind nine weeks. I think they had to have eaten at least the equivalent of three baby hippos every day quite happily. Unfreakin' believable.

The emphasis this summer is exercise and the great outdoors; activity, activity after wonderful activity. Tonight we took a walk around our local lake, at lease we thought we were taking a walk at the lake. It's been a few weeks since we have been over there and obviously they are doing some maintenance drainage type stuff. Where the waters edge used to be now there's nothing but mud flats, and yes, despite the warning signs we did see a group of young boys playing in the mud, and it made me nervous. What the heck do you do as a responsible adult... do you shout "Oi, you little shits get outta there or I'll call your mothers"... not knowing who their mother's are... actually we did know one of the little boys and I know his mother quite well. I wished I had taken my Droid with me but alas I had planned an unplugged walk with the girls and left it at home. I worried for a moment that they would get stuck in quick sand or something, do you think there is quick sand in the middle of a little town in GA with a dredged pond? I don't know, I guess anything is possible. Well I think they got out alive and all is well apart from some muddy clothes and maybe a lost tennis shoe or three. Why do boys have to give us mothers such trouble? even when they don't belong to us? Thank God I have two girls and although I have to worry about the youngest being a little too inquisitive and courageous at times I don't have too many occasions to get all fearful hense pissy because she's doing something potentially dangerous. This could be the excuse I need to get out of all this physical torture "sorry kids, it's just too dangerous to be outside in the summer!".... cough, cough... "yes there's mud and sun and nasty little boys, not to mention gnats and killer Canada geese"..... "prolly should stay home and let me take pictures of you all summer!!" Hmmm now that sounds better. Tune in next week when I'll be blogging from the mountains of Tennessee, yes you know that means more activity and more creative excuses from me!!!! 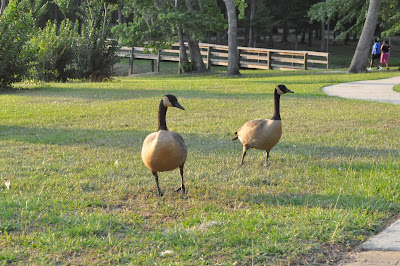 summer vacation already? we still have 10 days to go...