Throw yourself to the Wolves….

This morning was hard for me, hard to get out of bed, hard to get myself and the girls ready for our commute (five mins is a commute right?) and it was hard to think positively about the day ahead. There was not reason except for the fact it’s still January, it’s still cold and I’m STILL allowing negative thoughts to sit there in my head, growing uncontrollably until I’m paralyzed by my own inner critic.

I have been following Cherry Woodburn and decided to sign up for her five week course on how to banish the negativity, stop aspiring to perfection and be the best me I can possibly be. So when Ash presented a cup half empty attitude this morning I had to step back and wonder if I had been her shining example of negative thinking!! Urgh!!! That’s when  I remembered Cherry’s teachings and turned my morning around. I chose not to lecture Ash about the positive, that will have to come later when we talk about how her day went and don’t worry I won’t really lecture.. we’ll just have some positive reassurance going on. I chose to be the example… to get ready happily and move forward with the morning, and by God it worked… choosing to release those heavy effin’ doubts is like a little hit of happiness and having an invisible harness hoisting you up in the air to meet the sky, to swing in the sunshine.

Is this getting too shiny happy for ya? Well it should. I then decided I would purposely stop on the way to work and get some pictures of the countryside. This morning was a glorious day to do it, it was seriously cold last night and all along the road were pretty fields covered in white, sparkly frost just like a Christmas card, remember, the ones you used to just buy in a pack and send out before we became obsessed with family portraits and goofy kids?  Anyhoodles, here was my thought pattern, I will drive to the cow field and get out and take some pictures. I will do this, I won’t care if there are other cars on the road and they think I’m a freak, this is my first objective of the day, to get a picture, second objective, to move on and get to work. And I did it. And then the farmer lady caught me. And then I felt silly, but she was really nice and we had a little interaction and she didn’t have a shotgun!!!!!  I couldn’t help wondering what the heck she thought I was gonna do there in a cow field with a camera and my mock croc loafers obviously not dressed for mid-week cattle rustling. Giggles. 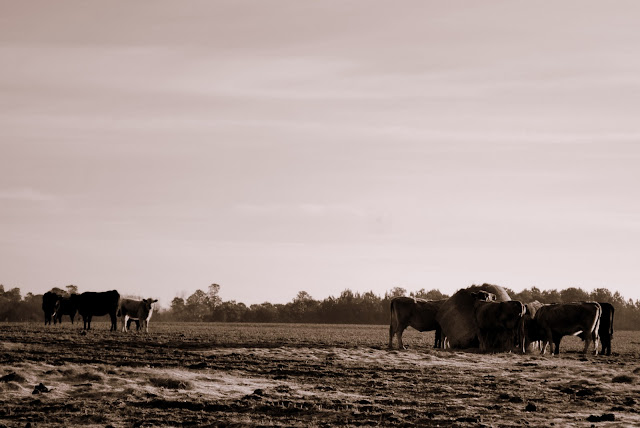 So I bid her good morning and got in the Jeep kinda happy with myself for doing what I have wanted to do for a long time. Then it got the better of me, I had to stop again and grab another snap of this beautiful morning, this time I went off the beaten path a little. I got out and started snapping away at a random fence and frost covered weeds and suddenly the silence was broken… by howling coyotes!!!! What the Eff… they sound pissed, hungry and close!!!! Just one more snap before me and the Nikon hop back in the safe enclosure of my rugged Commander and finally head in the direction of the office.
I could just imagine it, it would be weeks before anyone found me out there in the wilderness, frozen to death with Nikon in hand after being half eaten by a pack of hungry wolves… what would the neighbors say!!!! 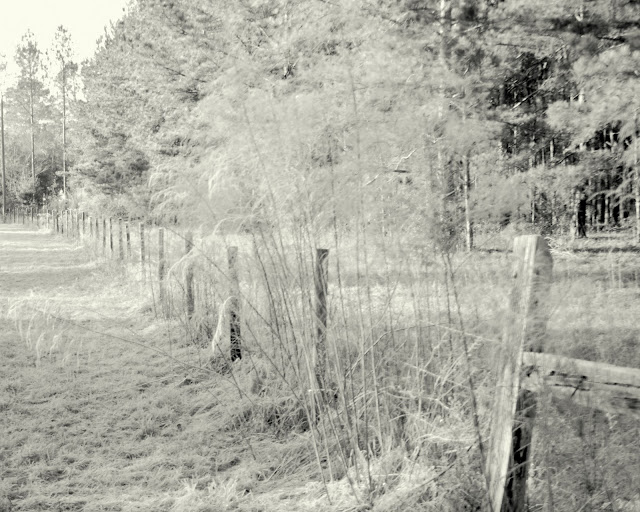 So, upon reflection maybe I should throw myself to the wolves more often, it was a lot more fun than just getting in the car, dropping the kids off and getting to work on time, uneventful and boring. All that wonderful country side I want to share just passed by each morning because I’m too chicken to stop and take pictures. That my friends is getting out of my comfort zone… which by the way it soo over talked about these days… but I feel great, invigorated, empowered. It’s taken me a while to admit that wandering around with a camera at my face is actually what I’m most afraid of but it’s the one thing I really want to do; share my surroundings, my visions, my perspective.

Here’s an adaptation of Marianne Williamson’s quote which Cherry shared this morning on her site.

“My deepest fear is not that I’m inadequate. My deepest fear is that I am powerful beyond measure. It is my light, not my darkness that most frightens me. Who am I to be brilliant, successful, talented, fabulous?  Actually, who am I not to be? I am a child of God/Universe.  My playing small does not serve the world. There is nothing enlightened about shrinking so that other people won’t feel insecure around me. As I let my own light shine, I unconsciously give other people permission to do the same. As I’m liberated from my own fear, my presence automatically liberates others.”

How will you liberate yourself today?

nice...love the quote there at the end...and the black and white breathes peace...

ahhh yes, the fear of success. :) free your mind and the rest will follow

A few more hours till February and it's fab that you ended Jan positively. Great shots and here's to a fab Feb :)

Well that is just awesome. Liberate yourself. Now that is a goal to strive for on a regular basis. Thank you for liberating yourself and sharing the shots. They are worth it. And so are you.